David G Dangerfield is one of Australia’s senior professional Martial Arts instructors. He is also the Founder and CEO of the Compass Institute – one of Australia’s most innovative educational services for people with disabilities.

David is well known for his philanthropy and social work. His efforts have been recognised with a number of awards (most recently Australia Day Citizen of the Year at a ceremony on the Sunshine Coast in 2014). 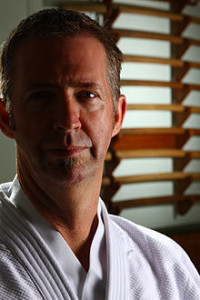 has garnered from his study and practice of traditional martial arts under some of the great masters of the day. He has been in considerable demand around Australia and internationally mainly because his workshops genuinely offer a very new approach to corporate learning.

As a senior executive who was a recent participant in India said… “I’ve been to many corporate training seminars however I’ve never experienced anything like this. The activities we normally do are really just filler and the content is very much ‘lecture’ based. Genuine opportunities to learn important skills are very rare. In this seminar every activity and story presented me with new perspectives and truly critical insights, all in such a seamless way.”

David very much has a no-nonsense approach that stems from 30 years of professional martial arts instruction. The environment is focused and even challenging with participants regularly taken well outside their emotional and intellectual comfort zones. Despite this David somehow manages to provide a soft landing even from the greatest heights.

In 1984 David Dangerfield had his first encounter with Aikido. On seeing a demonstration he was instantly attracted by the formal and structured nature of the art, combined with its visual beauty and obvious potential effectiveness. David had already been training in various martial arts since 1974, including Shotokan Karate & Chinese boxing and had gained experience in the security industry. In 1986 he began training in Aikikai style Aikido.

In 1991 David officially founded The Aikido Institute Inc as a non-profit martial arts education organisation on the Sunshine Coast in Queensland in 1991. The Aikido Institute was a full-time Dojo providing Alternative Education programmes based on Aikido for young people in local schools. David achieved his Nidan (second degree black belt) in 1993. It was around this time that he began to travel to Japan to further his understanding of Aikido and Budo in general. He traveled twice a year to Japan on month long training trips where he studied at the Yoshinkan Hombu dojo, training under Inoue Kyoichi Sensei and Chida Tsutomu Sensei. He also made occasional trips to the Aikikai hombu dojo in Tokyo and several trips to Iwama, where he trained with Saito Morihiro Sensei.

In 1996 David was awarded his Sandan and by this time he had already been teaching for 4 years full-time. In 1997 David met Nishioka Tsuneo Sensei, a senior master of Shintō Musō-ryū. This meeting had a great impact on him and he found that his personal direction and ‘style’ became clearer. 2000 marked the year that he was accepted as Nishioka Sensei’s Uchi Deshi (inside student) and furthered his studies in this Kobudo.

In 2003 Nishioka Sensei awarded Dangerfield Oku Iri Sho and in 2006 he became one of a small number of people to receive the traditional certification ‘Shomokuroku’ from Nishioka Sensei. In the same year he received his Yondan (4th degree black belt) in Yoshinkan Aikido. Most recently David was promoted to Rokudan (6th degree black belt) in the art of Aikido at the 100 years of Aikido celebrations in Malaysia 2012.

Due to changes in the Yoshinkai Foundation Dangerfield, and other notable Yoshinkan instructors around the world, resigned from the organisation. Since then David has continued to practice and teach both Aikido and Shinto Muso Ryu under the Kenshinryu 剣神流. He is currently the Head Master of the Kenshinryu and CEO of Compass. To go to the Kenshinryu website, please click here.

In 2014 David’s first book: Martial Reflections – In Search of Wisdom was published by Icon Publishing. It is a collection of short stories that blend practicality, budo philosophy and poetic imagery.

2014 also saw David awarded the Sunshine Coast Australian Citizen of the Year award for his pioneering work with youth at-risk, alternative education and for his contribution to the disability field.

In 2014 & 2015 The Compass Institute was recognised at the Sunshine Coast Business Awards with Business of the Year, Not for Profit Organisation of the Year and awards for Leadership and Social Responsibility. In 2016 Compass was inducted into the Business Hall of Fame at a ceremony on the Sunshine Coast.

Being a university qualified trainer, with over 20 years of experience David has combined his martial arts skills with education in many different ways. David pioneered the use of Aikido as an Alternative Education framework in Australia with intensive behavior management programmes for youth at-risk expanded to include leadership development, special needs, personal safety and teacher in-service. Between 1992 and 2006 over 7,000 school students participated in the Aikido based life skill programmes in south east Queensland schools. Topics covered in the programmes include martial values, time management, self-identity, nutrition, relationship management and of course personal safety and self-defence. From 2001 David has regularly run a number of workshops for many of Queensland’s Paralympic athletes, sharing with them the technical and psycho-emotional training aspects of Aikido.

Budo and People with Disabilities

In 2003 David founded The Compass Institute Inc, Australia’s first accredited Disability Service based on the principles of Japanese Budo. The Compass Institute Inc. provides post-school education, training and vocational opportunities to young people with intellectual and/or physical disabilities. The curriculum for the centers includes regular practice in Aikido and Shinto Muso Ryu Jodo. In 2013 The Compass Institute Inc is a registered charity employing 30 specialist staff and supporting over 90 young people with intellectual and/or physical disabilities through 5 centers from Caboolture to Gladstone. One of these centers is the working farm, which allows around 20 young people to gain access to further training in animal husbandry, horticulture, nursery work, and property maintenance.